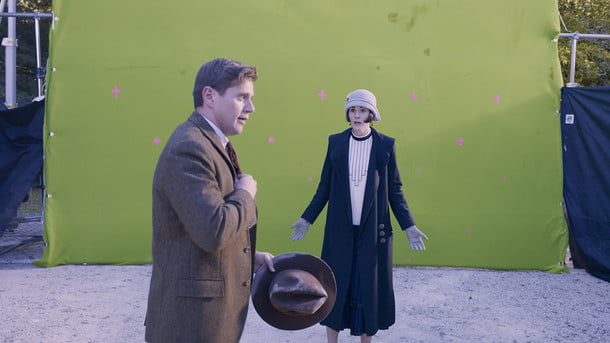 While some wicked souls use deepfake tech for nefarious purposes, we like to think we’ve used it as a force for good – de-aging Bill Nighy for a turn in Detective Pikachu. Framestore CCO, Tim Webber spoke to The Financial times about how it’s done and what it all means for the future of CGI. Read about it here.

For those who might’ve missed it, here’s a quick look at last weekend’s Sunday Times magazine, which featured a deep dive into the world of His Dark Materials. As well as some unseen snaps of our glorious VFX work, the piece also features a chat with our very own Creative Director, TV, Russell Dodgson (who we’re reliably informed had words with the journo for not, y’know, mentioning the company who brought all those incredible daemons to life.)

Try as he might, VFX Supe Kyle McCulloch (LDN) just can’t escape the glamorous world of Downton Abbey. This time he chatted to Digital Trends, who quizzed him about invisible VFX and the show’s biggest challenges. See the full article here

The Aeronauts is still up-up-and-away, and had its UK premiere at the BFI London Film Festival this week. There was a lot of buzz about how great it looked, so a huge congrats again to our MTL team who worked so hard to bring this to the big screen ☁️ ☁️ ☁️

Fundraising in memory of Charlie Habanananda

This week the LDN office has been hosting a variety of events in memory of Charlie to raise money for his family.

For a small donation, staff got the chance to test their sword-fighting skills on our GoT VR experience, Beyond the Wall. There’s also a raffle, with prizes from local companies, to be drawn today. But that’s not all…

Staff packed out the Cafe on Wednesday for a special Quiz night, hosted by a very glittery Jonathan Fawkner (credit to Alan Woods, for creating those tricky questions). ‘No Chancery Lane’ were crowned the winners, with ‘Talents got Talent’ coming in a close second. A surprise chili-eating round had staff doing their very own Charizard impressions – reactions to the hottest chili sauce – suitably named ‘Da Bomb’ – are included below for your entertainment.

Staff also brought in plenty of baked goods for a fundraising bake sale, which were snapped up in record time. Well done to our bakers and cake-eaters!

Yesterday was World Mental Health Day, and LDN’s fifth floor campaign hosted a series of relaxing and mindful activities throughout the day, including knitting, colouring, potting prickly cacti and trying some healthy snacks.

Staff knitted Garter squares which will all later be joined together to make a blanket.

Throughout the year activities will be hosted to help employees manage their well-being and mental health, so watch out for the next series of workshops.

And don’t miss the mental health episode of the Access VFX podcast featuring our very own Lead Modeller, Jason Edwards (LDN). Have a listen here.

On 6th October, families and friends were invited to take part in a Studio Tour to learn more about where our employees work and and get a better understanding of what they do day-to-day. We offered several 1-hour tours and had about 100 guests take part.

Know someone who’s gone above and beyond? Head here to cast your votes for the three colleagues that have knocked it out the park in the last few months (and no, unfortunately you can’t vote for yourself three times)

That’s it for this week. Hasta La Vista, Baby.