Ever wondered what a beaver version of The A-Team might look like? NY created three 30-second spots for Yellawood’s ‘The Woodlands Most Wanted’ campaign, directed by Murray Butler (Framestore Pictures). The spots feature some cunning CG Beavers, in an attempt to pull off a meticulously planned heist.

Butler and the Framestore team gave each member of the beaver gang their own individual performance and personality, with a subtle nod to pop-culture movie references. Meet The Lodgefather and his team of beaver bandits here.

… take coffee way too seriously, but we won’t. Teaming up with Leo Burnett and Directors ‘Us’, we worked on the VFX, colour and compositing for the new McDonald’s McCafe spot We Could. The spot brilliantly mocks nearly every single idealistic coffee advert out there. Someone had to do it.

The ad has been making waves in the press, even making Campaign’s ‘Ad of the Day’.

Ad of the Day: McDonald's is showing the ridiculous ways in which the fast-food giant could talk about McCafé (but doesn't). https://t.co/gukfVzWDJL Via @LeoBurnett pic.twitter.com/iSBhMTqmrP

.@Framestore has teamed up with @LeoBurnettLDN to create a collection of hyper-stylised vignettes for @McDonalds' new 'We Could' campaign.https://t.co/4dLqptxtfj pic.twitter.com/ZQNCyzmjUw

Global VFX: State of the Industry
Helen Stanley (LDN) says how Framestore have pioneered another new platform, VR and how far we evolved from the first VR project in 2012 Game of Thrones to our more recent, ambitious ride installations. Fiona Walkinshaw (LDN) also talks about the decision to open Montreal Facility and the growth of VFX industry out there.

Bright Northern Lights: The Evolution of the Canadian VFX Industry
VFX Voice spoke to MD Chloe Grysole (MTL) about the growth of the VFX industry in recent years and why we chose to set up a facility in the region.

Moving West, in MTL this week recruiters Jules Thebault-Dagher and Laurence Leblanc-Robichaud along with the MTL immersive team head to GDC this week.

In London, head of Texture Alban Orlhiac was at IAMAG this weekend, joining The Foundry stage to present a talk on Mari workflow at Framestore.

Creative Director Sharon Lock (LDN) was 1 of 30 finalists for SXSW’s Excellence in Title design Awards for her piece OFFF CDMX main titles. Check out the photos below.

Global Managing Director, Fiona Walkinshaw (LDN) and CCO Tim Webber (LDN) gave kids from The Hall School a grand tour of Framestore. They even had the pleasure of sitting in our plush new Soho review suite while learning about what we do.

Thank you to the wonderful people at @Framestore, for having us! 🎞 (3) pic.twitter.com/1dL4yhAkqS

Meanwhile in NY, Mel Sullivan, William Sargent and Jonny Dixon were at the launch of Hudson Yards.

Framestore are a sponsor for APA London, who have their first ever charity partnership with EYH (End Youth Homelessness). EYH have launched a national campaign #NOWYOUSEEME to raise awareness for the ‘hidden homeless’ and are committed to ensuring young people have a safe place they can call home even when they have nowhere to turn. Head here to donate and find out more.

Framestore are supporting @APALondon’s first ever charity partnership with @EYH_UK. #NowYouSeeMe is a campaign designed to raise awareness of Youth Homelessness, please donate if you can ⭐️ https://t.co/38eF8w8WDm

Mike McGee-t on ur bike

Over in Patagonia, CCO Mike McGee (LDN) and 19 other cyclists completed the gruelling 928km ride through the Andes over 8 days, all in addition to small a 90km climb to raise money for charity Bloodwise – piece of cake!

If you would like to donate, please do here and a huge thank you for all the generosity so far ⭐

Actual footage of Mike in the Andes: 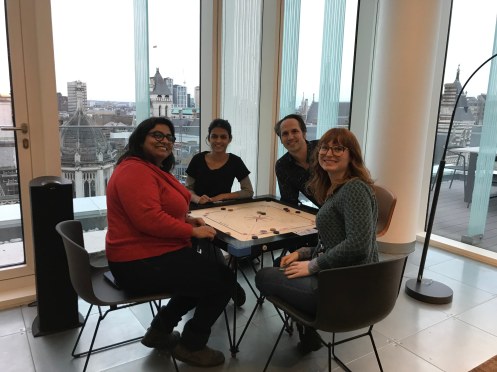 Framestore have pulled out all the stops for the great great new music video for @twodoorcinemaclub, directed by Max Siedentopf. Take a look at a few selected stills. Colour grade by @jessica_colour_fs . 🎶 . #colourist #vfx #musicvideo #grade #compositing

In other news, the talented Framestore crew who worked on Avengers: Endgame were sent this next level Infinity Stones doughnut by Marvel Studios

On that note, have a holesome and Jam-packed weekend. Until next time…