To Marwen, everybody. Fresh trailer for our latest Montréal show, which sees us playing with scale with Steve Carell. Stay tuned for more in the run-up to its winter release

Throwing all the shades

Can’t keep a good Colourist down. In addition to the above, Jessica Vile put the grade on a new promo for Young Fathers by directorial young gun Oscar Hudson – it’s exclusively on Apple Music only, so if that’s your streamer of choice, DIG IN. For the rest of us, here are some stills to get your appetite buzzing

Jessica also worked with Prettybird on a number for Xander Zhou and Gentle Monster, directed by Rei Nadal

From Simon Bourne, a triple: Max Richter’s ‘On The Nature Of Daylight’ saw him reunited with George Belfield at Somesuch, working with a brilliant performance from Elisabeth Moss

And there was more from the ongoing Royal Navy recruitment drive in the UK, with two more stories from director Greg Hackett for Trailer Park:

Do the Cannes Cannes 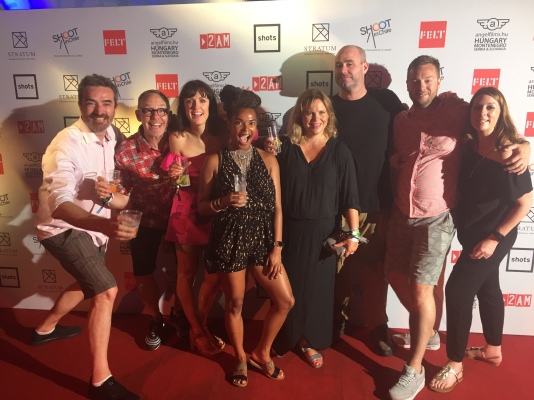 Our annual envoy to the South of France returns weighed down by five trophies and endless rosé – congratulations to the team behind the One Strange Rock immersive viewing experience, which collected in Mobile, Brand Experience, PR and Media categories 👏 👏 👏 👏 👏

Reminder of the work right here 🌍🚀

Sending our applause also to our friends at Somesuch, where director Daniel Wolfe’s ‘The Faith of the Few’ for MINI, feat. grade by our own Simon Bourne, picked UP

Kudos to Mike McGee also, who represented the good ship Framestore at Clear Channel’s chat on the future of #OOH, and what on earth #IRL will look and feel like in coming years. Blade Runner, it may in fact be

Thrilled to be leading the way on a new chapter of the hugely successful ACCESS: VFX initiative. Montreal, let’s do this thing 👊 More detail on the lay of the land coming soon

We are very excited to announce that we will be starting an @AccessVfx chapter in Montreal, Canada, led by our friends at Mill Film and Framestore! This is a truly historic move & continued collaboration for the #VFX industry, & the strength of the #AccessVFX #inclusion movement! pic.twitter.com/EKGizDDeqZ

Also out and about and expanding their brains, Team Texture in London attended #SubstanceDay (no, not like that), courtesy of Allegorithmic

Two weeks’ worth of wonder from Flamestorm, what you got team? 🔥⚡️

New to our division, this lot were an unknown. Having lost the toss we started batting…and did we bat. 13 on the board with no outs; 10 more in the third; a score of a mighty 40-11 by the end of the fifth! Even easing off the gas we added 17 to our total in the last two innings, landing a final score of 57-25, our biggest win of the season. MVP was a tough one with all shining so bright; we ended on a double award, to Nicolas Sauval for all-round great play, and solid efforts at first base from the mighty Puff.

Fast-forward a week, we faced the Hearst ‘Honey Badgers’:

We knew this would be a harder task, the Badgers undefeated to all but ILM. Fielding first, we got to know their batters well as they put 10 down on the scoreboard. We pulled back four in quick succession, and held our own in the second. By the fourth, we managed to claw a few back, though this side was so experienced they were able to hit their stride once again, racking up more on the board.

The last three innings were a fielding masterclass from the ‘storm – holding those Badgers to FOUR runs! Great catches at first base and in the outfield kept the match in contention; but a late lag in our batting meant we couldn’t add to the scores, bar a single home run. Final score settled at Honey Badgers 26 – Flamestorm 18. MVP, for a stunning outfield catch and some mighty swings, went to Herve.

Despite the differing score-lines, both were fantastic games played against great opposition – exactly what we play for. Next week, we take aim at the pesky T-Birds from Twitter.

Getting this house in order

Give London a moment to revel in the rays of this development:

Looking good, no? You know what also looks good? Correct email footers. If you’ve never clicked this link before, click it. Click it real good

Meanwhile, thrilled to see the World Cup bunting made it to Montréal, too – snapped in situ at this week’s Town Hall

⛔️ HOLIDAY KLAXON: Speaking of, have a wonderful long weekend, Canadian friends – Jean Baptiste day will be keeping the team OOO this Monday

See you on the flip ✌️