Here we are, Avengers. Everything you and the rest of the Marvel Universe wanted to know about our action-packed 253 shots and a squad of characters, old and new

Suiting up for @MarvelStudios' #AvengersInfinityWar. Read more about our work on the record-breaking film #VFXbyFramestorehttps://t.co/UruVcbHVT0

They’ve been taking over on Insta too, so take a scroll through

Directed by the Russo brothers, Avengers: Infinity War marks the 10th anniversary of #MarvelStudios and the final arc of the current Marvel narrative. We completed 253 shots for the opening act. ‘This film was a lot of fun to work on’, says Patric Roos, VFX Supervisor. ‘It gave us the chance to be involved in so many different kinds of work, which we’re proud to see on the big screen.’ . . . .#VFX #Animation #Marvel #MarvelStudios #Framestore #Avengers #InfinityWar

Cheers also to Patric and Liam, interviewed by The Art of VFX on their work on the picture

Of course, Infinity War is just one of many Marvel contributions we’ve made over the years – get a load of Framestore’s highlights in this little number, celebrating Marvel’s 10 Year anniversary

Congratulations to our friends at @MarvelStudios, who are celebrating 10 years in movie-making. Thank you for letting us be part of your universe. . . .#Marvel #Marvel10Years #vfxbyframestore

Makes us look and feel damn fine. Bravo to the Advertising team behind Gap’s summer campaign, the follow-up to spring’s heady human zoetrope. Directed once again by Kim Gehrig at Somesuch, with VFX here led by Ben Cronin

Labs are back on the PGA Tour for another year, delivering the goods for Morgan Stanley’s philanthropic activation #EagleUp. The digital signage on both Broadway and on site at TPC Sawgrass, FL, will be lit UP with a refreshed leaderboard, counting eagles scored which will translate to hefty donations to Book Trust. Follow @morgan.stanley and campaign frontman @justinprose99 for more over the weekend

If you’re in #TimesSquare today, be sure to check out the LIVE broadcast of #THEPLAYERS tournament from our HQ. Follow #EagleUp to track the Eagles made throughout the day!

News in too that the original #EagleUp activation won silver at last night’s Financial Communications Society awards in a four-piece haul for Morgan Stanley, bravo Labs 👏

Advertising’s Helen Stanley took to the stage with Tencent, at a Department of International Trade-led gathering committing collaboration between the UK creative industries and the Chinese market

Huge thanks to @tradegovuk_CI and Tencent for this morning’s panel feat. Framestore Advertising MD Helen Stanley. Extraordinary things ahead for the #creativeindustries pic.twitter.com/vUN490l5Uf

Listen in to Mike McGee on the podcast waves with Movidiam

"As the demands and the different #platforms grow, we also have to expand our connections and find new people to fulfil the demand."@Framestore's Mike McGee talks about the importance of showcasing new #talent.

In FRAMED custody this week: we let Gerry Corona Sorchini out of the Capture Lab, for a grilling – grab a Mezcal and get involved

STAFF AWARDS KLAXON, team. You have until Monday to nominate the kings and queens of your personal red carpet. The voting form even put on a new outfit for the occasion, so hop on over to the Intranet now

Mental health, that is. It doesn’t always get said but it sure is important. It’s Mental Health Awareness Week next week (in the UK, at least), and the London office is hosting a number of workshops around stress and how we manage it in the workplace. A few spaces remain for Monday and Wednesday’s sessions, sign up here; and even if you can’t make them, take some time out to give the subject some thought 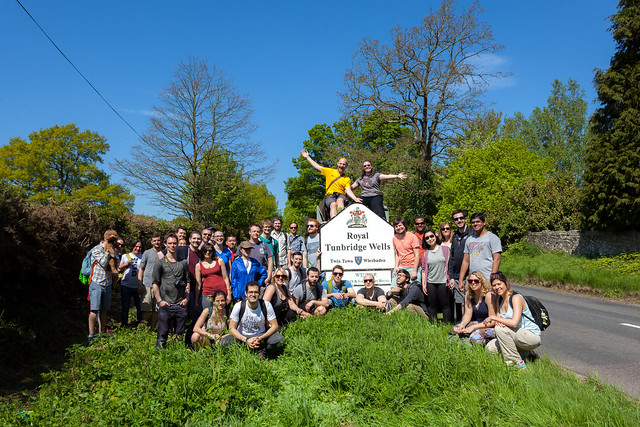 Our intrepid London hikers go from ‘shire to ‘shire. Last weekend, 38 Framestorians (and a pup) conquered the Royal Tunbridge Wells Circular, on the one weekend England turned on the weather – see the evidence right here.

Want to join? The next adventure takes place on 9 June on the Ashurst Circular, which brilliantly and topically is part of Winnie-the-Pooh’s 100 Aker Wood trail (!) Details HERE, or join the mailing list hiking-ldn@framestore.com

London, hear that battle cry: a foosball tournament is coming. It’s in aid of SoccerAid, 5 quid team entry, what’s not to love. SIGN UP HERE by next Friday. The Round-up Foundation (aka my wallet) will even make an additional donation in thine honour for the sassiest team name 💁

And on the East Coast: rev your engines, the second annual Mario Kart tournament takes place on FRIDAY 18 MAY. All driving abilities most welcome, Nate Diehl is your man for sign-ups

Match report in from Flamestorm: sadly, sometimes, life’s a pitch

After a promising start, leading off with four unmatched runs in the first, the ‘storm struggled to find its feet once Thrashers hit their stride.

FS struggled both at bat and in the face of mighty hits from the Thrashers. There were moments of brightness in the field, with some strong relays back in, but with most of the opposition’s male hitters smashing beyond the back line we could only watch as they racked up the points.

Next week will hopefully see an uptick in success to come back strong against The Economist ‘Red Stocks’. Wednesday 16th, Pitch 15, see you there #🔥⚡

Will Google’s News ever be impartial?

What’s a WeChat mini program, when it’s at home?

Shall we just ask Deadpool?

Deadpool, is it the weekend yet? Hella yes. Have a good one 🙋